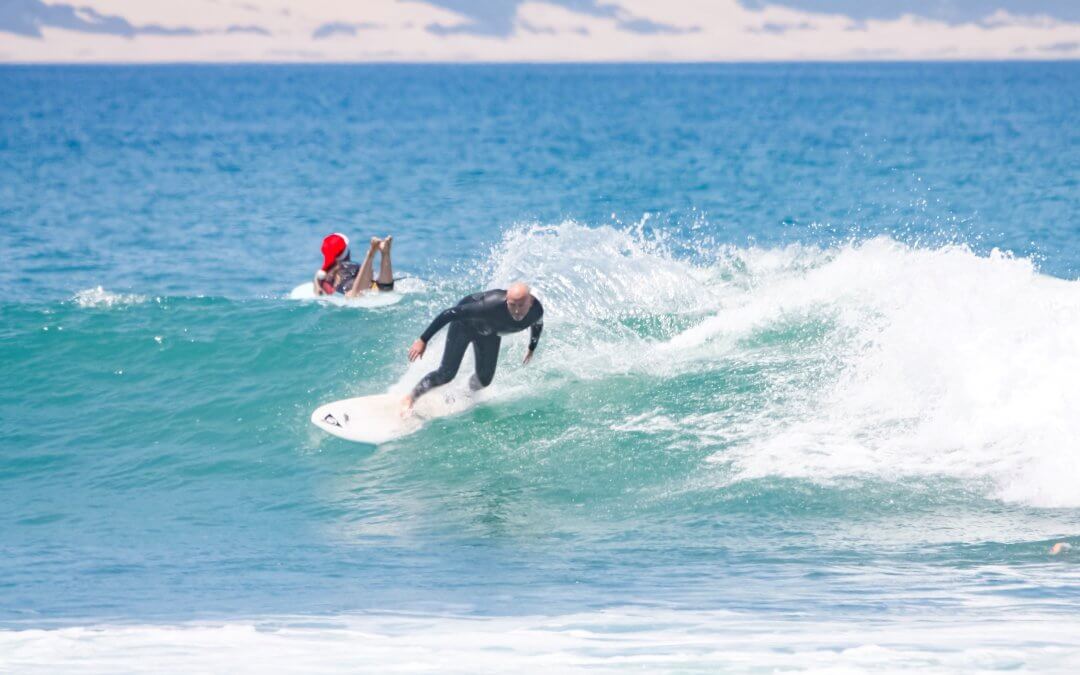 I have surfed in many places and even though some of the international surf spots will forever remain well ingrained in my memories for the adventures, cultures and of course cooking surf, J-Bay remains my favourite place for easy access, consistent and safe waves that can be shared with my son. As is with all surf spots, be cool, have manners, wait your turn and respect the locals and all should be good, and you will have a jol surfing great waves.

Not as protected as the other waves on strong South West days, Point does handle a large swell. The bowl offers some heavy take-off’s, but after that the wave mellows out and it really becomes a fun rippable wave. The point usually has waves even on a small swell, there will be something to ride. If its flat at the point, its flat…
There is a long “danger zone” that has to be negotiated before you reach the safety of the back line, especially on the bigger days, so don’t make the mistake of thinking you’re out before you’re out.
Point is best in the 3-8 foot range, depending on what size waves you are comfortable with. Great place for the groms to surf, who have to share with longboarders.

Further down the point, one comes across a fun barrely wave aptly called Tubes. It a short and sometimes intense ride but loads of fun. On the bigger days there is a strong rip and the wave is best in the 4 – 5 ft range. Best offshore on a South West, there is relatively small take off section, which means Tubes cannot hold a large crowd. When you get this wave in the right conditions, you will get that elusive barrel! Often shared with boogie boarders.

Known as one of the world’s leading waves! Quite a tough paddle out, suggest you wait and watch how the locals do it. Timing here is everything, easy to get hammered if you don’t know what you are doing. Once in the line-up, take time to check out the situation. Supers is the most localised spot in South Africa, however, if you wait your turn and show respect you will end up getting waves, if not too crowded, which unfortunately is often the case. The wave is best in the 4 – 8 ft. range with a South West. On the better days the wave breaks from the top of the point and winds all the way along the reef, past the car park to an awesome barrel section. Then its kick out time before the wave closes out at Impossibles.

The top section of Supers which breaks both left and right. Works best on a North West with only a light wind. The wave has earned its name because it really breaks in shallow water which means you are your board could get injured surfing this wave.

Probably the heaviest and most unpredictable wave in J-Bay. Best at 3-5ft and needs a North West. Likes a high tide, otherwise it tends to throw big close out sections.

Situated on Main Beach near J-Bay village so park and let the family hit the factory shops while you grab a surf. Kitchens is a mellow reef break that is an undervalued wave. A light South West wind is best on a mid-tide, when too windy the spray will spoil the experience.

J-Bay thrives on tourism so all welcome, just don’t be a kook in the water and spoil it for others frothing to get some well-known J-Bay waves for their memory bank.